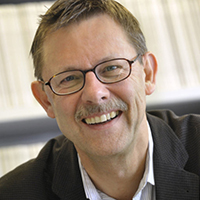 We are very happy to announce that Professor Johannes (Hans) G. de Vries will be the editor responsible for future Science of Synthesis update content on aldehyde chemistry.

Professor Hans de Vries is currently head of the “Catalysis with Renewable Resources” department at the Leibniz Institute for Catalysis (LIKAT), Rostock, Germany. He has previously held joint positions at DSM as Principal Scientist of Homogeneous Catalysis, and a Professorship at the University of Groningen, The Netherlands. His current research interests continue to include homogeneous catalysis, with a focus on the conversion of renewable resources and platform chemicals.

In Volume 25 of Science of Synthesis you will find the most useful synthetic routes for installing the aldehyde functional group. The original volume was published in 2006 (Volume Editor: Professor Reinhard Brückner), and includes subchapters on particular classes of aldehydes such as ynals, arenecarbaldehydes, and polyenals.

Professor de Vries is an experienced editor for Science of Synthesis, having previously been involved with two Reference Library titles, so we are delighted that he is continuing his association with Thieme.