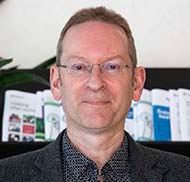 We are very pleased to announce that Prof. Tim Donohoe will be joining the team of Volume Editors for the Science of Synthesis Knowledge Updates, where he will be overseeing future content on Six-Membered Hetarenes with One Nitrogen or Phosphorus Atom (Volume 15). Prof. Donohoe is currently Professor of Chemistry at the University of Oxford, where his research interests lie in the field of redox chemistry, catalysis and the application of this methodology to natural product synthesis. Further details of Tim’s distinguished career can be found below.

Volume 15 of Science of Synthesis was published in 2005 (Volume Editor: Prof. David StC. Black) and covers methods for the synthesis of some major classes of six-membered heterocyclic ring-systems that are of key importance due to their widespread occurrence in nature, and for their application in synthetic pharmaceuticals and drugs. Hetarenes covered in this volume include pyridines, pyridinones, quinolines, isoquinolines, and acridines.

Between 1989 and 1992 Tim studied at the University of Oxford for a D. Phil with Professor Steve Davies, and then in 1993 he went to the US for postdoctoral work with Professor Phil Magnus FRS.

Tim has published over 200 research papers and his research has been recognized with the Glaxo Wellcome Award for Innovative Chemistry (1996), the Pfizer Academic Award (2000), the Novartis Young Investigator Award (2001), the AstraZeneca Award for Organic Chemistry (2002), the Royal Society of Chemistry Corday-Morgan Medal (2006), the RSC Synthetic Organic Chemistry Award (2011), the SCI process chemistry award (2012), the RSC Charles Rees Award (2014) and an EPSRC Established Career Fellowship (2014).

Click here to visit the website for the Tim Donohoe Group and learn more about their research activities.