We are delighted to announce that the 2020 Thieme–IUPAC Prize has been awarded to Ang Li of the Shanghai Institute of Organic Chemistry. Professor Li becomes the 15th recipient of the prize, and joins a distinguished group of scientists under the age of 40 years whose research has had a major impact on the field of synthetic organic chemistry. The prize, which is awarded every two years and includes an award of € 5000, will be presented to Ang Li at the ICOS-23 conference in Shanghai, China, after his Thieme-IUPAC lecture.

We warmly congratulate Prof. Li and look forward to hearing about the latest developments from his laboratories! 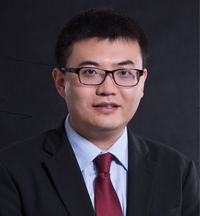 Ang Li completed his undergraduate studies at Peking University, Beijing, China, and then obtained a PhD from the Scripps Institute, CA, USA, where he worked under the supervision of Professor K. C. Nicolaou. He then spent time as a Research Fellow at the Institute of Chemical and Engineering Sciences, Singapore, before joining the faculty of the State Key Laboratory of Bioorganic and Natural Products Chemistry at the Shanghai Institute of Organic Chemistry, China, in 2010, where he is currently a professor.

Li’s research is focused on the total synthesis of structurally and biologically interesting natural products. To this end, he has developed powerful strategies for the construction of complex molecular architectures, which have enabled his group to complete the synthesis of more than 90 natural products (from over 15 classes) in his independent career to date, several of them for the first time. In particular, he has developed and demonstrated the power of 6π electrocyclizations and the Prins reaction as useful tools for the efficient construction of key structural motifs.

Ang Li is one of the best young practitioners of the art and science of total synthesis in the world today, and his work has contributed to the field of synthetic organic chemistry in major and innovative ways through his numerous and imaginative total syntheses and new synthetic methods.

Read more about his research.


Members of the 2020 Selection Committee:

The Thieme-IUPAC Prize is awarded based on scientific merit for independent research dealing with synthesis in the broadest context of organic chemistry, including organometallic chemistry, medicinal and biological chemistry, designed molecules, and materials. It is presented every two years to a scientist under 40 years of age whose research has had a major impact in synthetic organic chemistry.


Read more about the prize.
Check out previous winners.